In late October and early November, flowers triangular circuit in the northern mountainous province bloomed. People all over the country, especially the young, to get together for gurgles 'phượt' and the recording of beautiful photos as a souvenir with flowers where this particular mountain.

In Lao Cai, flower grows in the northern districts as Simacai, Bat Xat, Bac Ha and Muong Khuong. In Cao Bang, Tra Linh - Chongqing are the two triangular planting many circuits. But Ha Giang is where the most beautiful flowers and grows. 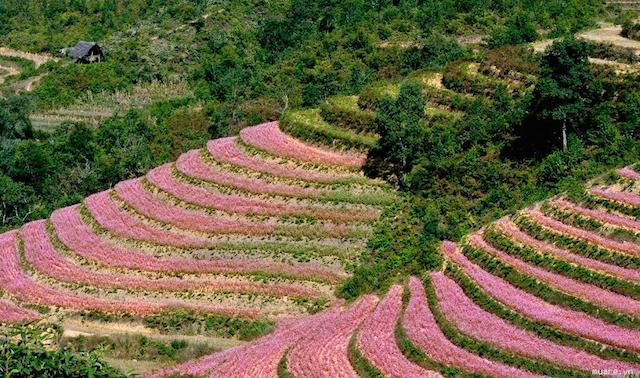 According to legend, ancient, mountainous northern people live primarily in corn seed, rice seed. One year, rice and corn in the depleted but still not coming season, both villages overcast. People go looking around the corner without seeing the food. Suddenly, people saw strange scent wafted in the breeze.

Villagers tracing ravine and saw tiny forest flowers, with triangular leaves hidden under the flowers. People bring their seeds for food instead of maize, rice and call it the triangle circuit.