Linh Ung Pagoda - Bai But is now considered the largest temple in the city of Danang in both scale and architectural art. The temple brings a contemporary style combined with traditional Vietnamese pagodas inherent flexibility Nam.Noi gas convergence.

Linh Ung Pagoda - Bai But located on a hill, take the direction to the sea turtle, back support primeval forests with many birds, temple situated on the Son Tra Peninsula and the newly inaugurated. Not only seen as a stamp of the development of Buddhism in Vietnam in the XXI century, but also the convergence of gas and earth spirituality and heart. 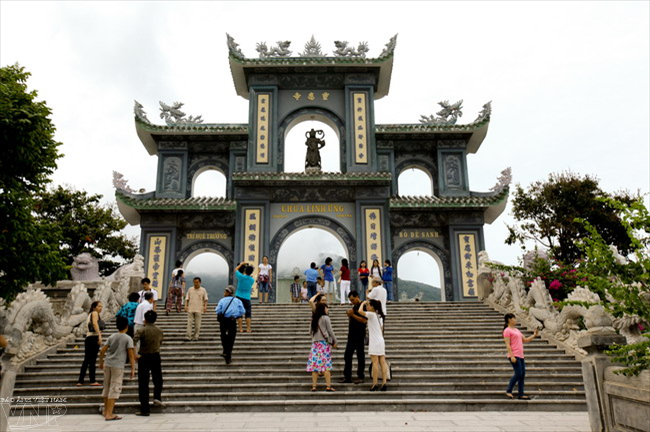 Buddhaland between earthly place
Linh Ung Pagoda - Bai But on top of Son Tra backrest firmly, face overlooking the vast South China Sea, far to the left as Cu Lao Cham island defense project, the property is the top of Hai Van obscured with South stretch gentle stream of poetry dream. Son Tra is a place of harmony between sky and sea with the mountain river in a quiet space, the sound of the sea lapping and narrative about an ancient story: At the time of Emperor Minh Mang, coastal fishermen here have discovered a statue in the sand, by setting am worship. And then, he Avalokitesvara appeared rescue aid suffering people pass round at damnation, since it still calm sea waves, fishermen peace deal, which here is called Bai But, otherwise known as buddhaland between earthly place.

Spread the years vicissitudes of time and history, is the holder, encouragement of religious meditation Chu merit, permission and creating all conditions of city leadership, the support of fellow Buddhists Linh Ung Pagoda-Bai But through 6 years of construction, now has horns on Son Tra mountain as testament to the combination of Dharma, and Ethnicity, makes a bold mark the development of Buddhism Vietnam in the XXI century, the National Monument rises Hung Vuong, paralysis Forerunner Patriarch celebrates 1,000 years of Thang Long-Hanoi.

Linh Ung Pagoda - Bai But is now considered the largest temple in the city of Danang in both scale and architectural art. The temple brings a contemporary style combined with traditional temples capital of Vietnam, with a curved roof with dragons, the solid pillars surrounded by a crystal dragon winding xao.Dien the high capacity, where the stately and purest. In the middle is the Sakyamuni Buddha Duty Counsel Ni Mo, the right is the Bodhisattva Avalokitesvara, and left the Buddhist Tripitaka, four Gods Long Protector with 18 Arhat sorted by a rule, protection for the electricity. 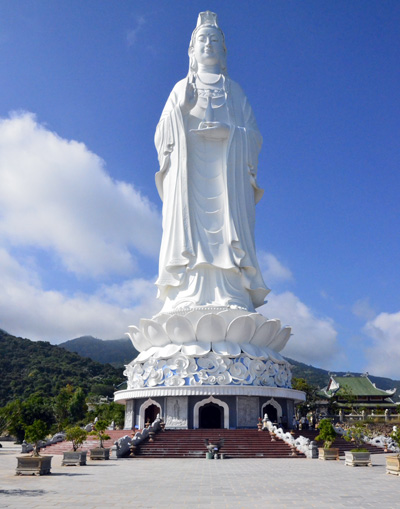 In particular, the Linh Ung Pagoda - Bai But Avalokitesvara Buddha image is considered the highest in Vietnam (67m high, 35m diameter lotus, or 30 storeys). The statue stood leaning against the mountain, overlooking the sea, kind eyes looking down, a hand caught eighty, the other hand holding the nectar like sprinkling peace to the far offshore fisherman. On the crown of the statue of Guan Yin Buddha 2m. In subjects with 17 floors hearts, each floor has a total of 21 altar Buddha statue shape, face, different postures, called "center-right Buddha Buddha".

From the above seventeen towers are visible to the entire city, mountains and sea Son Tra a perfect way. Beyond panoramic, Marble Mountains and beaches surrounded by fine white sand beaches appeared visibly. Early morning or late afternoon when the sun over the blue sky in the cool wind will bring people a great impression that there are few places. At night, stood looking down from the entrance, visitors will see a long streak of bright city lights like a meteor streaking across the night sky shimmering.

We can say, Linh Ung Pagoda - Bai But built into a new tourist complex formation of the city - resort of Son Tra Peninsula, in a prime location of this area, the temple has become where worship, living, learning and nuns, Buddhists, as well as a sightseeing spot of four visitors, a spiritual tourist attraction of Danang, a venue spiritual soil gas sky and hearts.

Great inauguration Linh Ung pagoda and statue Bodhisattva Avalokiteshvara morning of March 30/07/11, Bai But Tourism Zone-Son Tra Da Nang, self protection and ashrams Ban Linh Ung Pagoda-Bai But and Executive Board of the Vietnam Buddhist Association of Danang has long held a ribbon-cutting ceremony of the holy temple Ung.Day Spirit is also the last day of activity in the 3 days of the Great chain inauguration Linh Ung Pagoda - Beach mallow and statue of Avalokitesvara Bodhisattva.

Representative Danang leaders, Mr. Nguyen Ba Thanh, Party Secretary, Chairman of Da Nang City Council, Ms. Nong Thi Ngoc Minh, deputy chairman of the Danang People's Committee, and leaders of the district, departments and agencies in the city were in attendance to witness the ribbon cutting ceremony Linh Ung Pagoda. The ceremony also had the presence of the Venerable monks and nuns crowded, Buddhists and tourists from everywhere

Speaking at the ceremony, Mr. Nguyen Ba Thanh, Party Secretary, Chairman of Da Nang City People's Council has emphasized, since the city became centrally, with the focus on building infrastructure , investment and development on all aspects of political, economic, cultural, social, party and government Danang also very focused on preserving and improving the life of faith and the human spirit dan.Va the birth of the Linh Ung Pagoda has a policy reaffirmed respect for religious freedom by the Party and State, while contributing to more traditional cultural values of the nation.

Located at the center of Da Nang city 10km northeast, at 693m altitude compared to sea level, Son Tra peninsula is a privilege that nature has generously bestowed on the Da Nang. Stand anywhere on earth Danang can see this mountain.

In population ecology of this charming, is the vow of Thich Thien Prayer Campaign launch Buddhist Center near and far and the authorities, especially the leaders of Danang city land and create favorable conditions for funding, technical, dated 19/6 (lunar calendar) 2004, Linh Ung Pagoda Bai But commenced construction and is the most beautiful temple, the largest of the 3 star "Linh Ung" in Danang. Includes Linh Ung Non Nuoc stone situated on Mercury - 1 in 5 tops Marble; Linh Ung Bana Cathedral located on top of Ba Na and Linh Ung Bai But halfway up the mountain located in Son Tra a corner Languages Project Danang sea air.

From Linh Ung Pagoda, overlooking the front was quiet Danang Bay picturesque sea. On the right is part of Son Tra peninsula with beautiful beaches surround the city of Da Nang. In the distance is the Marble Cham Hai Van floating in the clouds. Behind the temple is the primeval forest mountain nature reserve of Son Tra with "howling gibbons cheep" ...

Especially, Linh Ung situated in a location that is very far away from the coastal road on the Son Tra Dien Ngoc, visitors can see the temple with blue roofs are solidly on the side of the semi East dao.Day viewed is the largest temple of the city on both the size and terms of art.

The temple brings a contemporary style combined with traditional temples capital of Vietnam, with a curved roof with dragons, the solid pillars surrounded by dragons also very delicate undulations, this is an eternal symbol of this tradition of our nation.

Main power high capacity, where the most solemn and quiet. In the middle is the Sakyamuni Buddha Duty Counsel Ni Mo, the right is the Bodhisattva Avalokitesvara, and left the Buddhist Tripitaka, four Gods Long Family Play along 18 Arhat sorted by a rule, protection dien.Day own an old order prescriptive and spiritual significance.

Thus, Linh Ung Pagoda is not only a place to visit, the activities of the monks, Buddhists, but also as a tourist, visiting the fascinating city of Danang.

Important highlights of the Linh Ung Pagoda Bai But Guanyin Buddha is considered the highest in Vietnam (67m) .Tuong leaning against the mountain overlooking the sea, a hand caught eighty publications in one hand, bottle of orange juice like sprinkling giant peace to the far offshore fisherman, carrying bag on a proposal forward wave yen season serene and prosperous country.

This monumental works by the Swiss sculptor sculptor Lam and Thanh Chau Write construction. On the crown of Guanyin statue with Buddha statues 2m. In lap 17 floors each floor object are altar total of 21 statues of Buddha with posture shape different expression called "center-right Buddha Buddha".

From the statue on the tower, visitors can cross the entire look of the city, mountains and sea Son Tra a perfect way. Beyond panoramic, Marble Mountains and beaches surrounded by fine white sand beaches appeared visibly. Early morning or late afternoon when the sun up in the sky blue of the sky and cool breeze gives visitors an excellent impression that few places can get. At night, stood looking down from the entrance visitors will see a long streak of bright city lights of like a meteor streaking across the night sky, beautiful.

In particular, visitors stand on any corner in this population can also admire the statue of Avalokitesvara Bodhisattva with marine paint landscapes epiphany, while construction of statues had repeatedly received light halo shining behind, on the statue head.